Average Joe is an American reality television show broadcast on the NBC beginning in 2003. 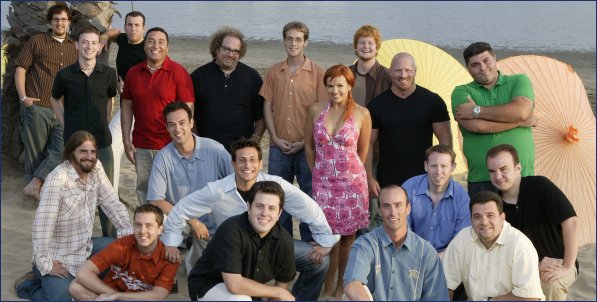 Instead of attempting to make a “dream couple” between two extremely attractive people, Average Joe tried to get 16 to 18 ordinary men to win over the heart of a beauty queen. The men were what the producers considered to be average in appearance, with many being overweight or underweight and nerdy, or awkward in their behavior and personalities.

Prior to the show’s start, the beauty queen was not aware she was to be dating “average” men. She was instead led to believe her show was going to feature only handsome suitors. (The second series, taped before the first one aired, also contained this element, thus avoiding the problem associated with the second season of Joe Millionaire.) Halfway through the show, several handsome suitors appear and compete against the average Joes.

Throughout the show the beauty went on various dates with the men, both in groups and individually (at her choice). When the attractive suitors show up, there were also competitions between the rival groups of men. At the end of every episode the beauty votes to send a certain number (usually four) of the men home. In the end, she must pick only one to go on an intimate vacation with.